When it comes to handling YOUR marketing, I am the SECOND best choice, here’s why

These stats show Instagram as the preferred social platform – are you on it?

Get Ready for the Next Wave: Generation Z

Just as we get bored with complaining about the younger generation, here comes a new one to stress over. The generation of young people now entering college and the workforce are not just Millennials on steroids. They are another new and distinct group with a unique way of thinking, problem-solving and communicating.

Whenever a new generation begins to emerge, pundits are quick to jockey for naming rights.  Those born between 1995 and 2015 have been called iGen, Gen Tech, Gen Wii, Net Gen, Homeland Generation, Post Millennials, Digital Natives and Plurals. But the name that looks like it’s going to stick is Generation Z or Gen Z. 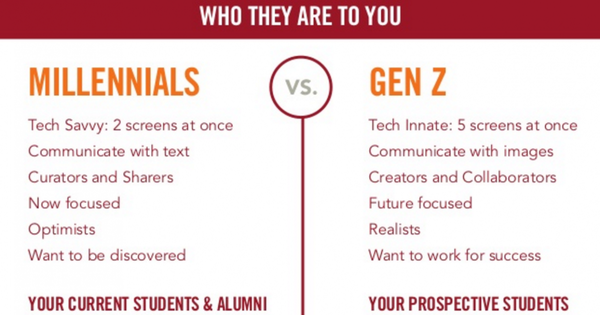 The oldest members of this generation turn 24 this year. They have entered the workforce and take their jobs seriously. In many cases, they think in terms of careers rather than gigs. Trailing behind, the youngest members of Gen Z are just turning four years old—but they are also part of the largest population in the United States at nearly 74 million people. According to Nielsen, Gen Z’s make up 25.9 percent of the population compared to Millennials at 24.5 percent, Gen Xers at 15.4 percent, Baby Boomers at 23.6 percent and the Silent Generation at 10.5 percent.

It’s estimated that Gen Z will comprise 40 percent of U.S. consumers by 2020. This is the fastest-growing generation in both the workplace and the marketplace. This is why you’d better start paying attention now.

These young people have had a screen in their hands since they were toddlers. The innovations that members of older generations see as new technology have always been a part of Gen Z’s lives. For example:

How Will You Reach Gen Z?

Gen Z is the most diverse generation ever and they are sensitive to diversity. They like it. They value it. To them, it’s not about political correctness. They genuinely feel it is important to not offend other cultures. They sincerely like being surrounded by people who are different from themselves and want to learn more about other cultures.

First, technology is innate to them—there is nothing new about it. Technology is only new to those of us who remember the way it was before the technology was invented. If you don’t understand technology, you will appear lazy, because in their eyes, everything you need to know is right there for you to learn. So, the solution is to Google it, YouTube it, learn it. While you may have just gotten used to texting your Millennial customers, it’s time to up your game using FaceTime, Skype or other virtual live presentation tools.

GenZ’s are eager to build a better planet, a stronger community and a more peaceful world. It’s time for you to show your company’s purpose and how it aligns with those values. Make sure you’re only presenting products made and used responsibly, and those that have potential for good. Seventy-one percent of Gen Z say they buy brands that make them feel good about themselves.

This generation is well educated and are advocates of knowledge sharing. Be generous in sharing your expertise but do so in formats they relate to, like videos. A larger percentage of this generation will graduate from college than any previous generation. With their innate technology skills, they know how to research and self-educate. They embrace social learning environments and sharing and collaborating with peers. They are also impatient with a priority on speed.

How To Communicate With Gen Z

Fully embrace mobile communication—your website and emails should be designed for mobile first. Members of Gen Z are less likely to be reading, listening or communicating with you on a laptop or desktop. Reach them through social media and mobile.

Whether you have Gen Z members on your team or they are your clients, be authentic. Just be yourself. They love real and hate put-on. Listen for understanding with respect for their point of view and that high-priced education they earned. Ask them for input and make them part of the process. Be a collaborator not a salesperson. Know your core values and share them. Be upfront about what you stand for.

Give them lots of options to express themselves on the items they are co-creating with you. Take that mindset as their co-creator and let them have every customization option to make it their own expression of the brand.

Keep in mind that most Gen Z’s watch YouTube on a daily basis. There are stars in that media that you may have never heard of who are making millions of dollars a year influencing this generation. If Gen Z is a big part of your audience, you need to start learning who those stars are and why they have appeal. Forty percent of Gen Z’s say they prefer to interact with their favorite brands on YouTube rather than on any other platform.

Your marketing to Gen Z clients should focus on benefits and the results that your products and services provide using success stories. Learn to present yourself as a category or niche specialist—the expert—who can connect the dots for them. Explain how they can implement processes that will make them successful marketers using the tools of social media, promotional, and digital campaigns.

Create a customer experience worth talking about. If you do, they will talk about you and remain loyal to you. If you don’t, they’ll look for a partner who does create a share-worthy experience.

There are a lot of things to love about this new generation. They’re bright, they’re responsible (fewest smokers, drinkers and drug users of any generation), they’re educated, and they want to make the world a better place. Help them do it. 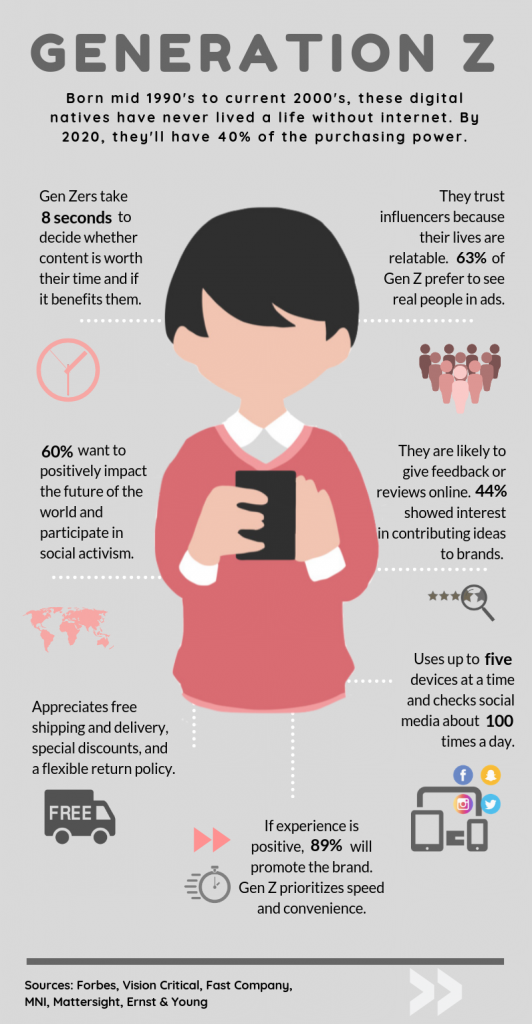